Valentia Island is one of the most famous Island in Ireland. Located in one of the most westerly points in Europe. It is on the Wild Atlantic Way and just off the Ring of Kerry. The Island of Valentia itself is approximately seven miles long and over 3 miles wide. Valentia has loads to do and see: The site of the Transatlantic Cable at foilhammerum bay.

We also have the Tetra Pod on the island which has huge importance with respect to evolution. You have the lighthouse, Bray tower,Geokaun Mountain the slate Quarry and the Skellig experience centre one of our pick up points to the Skelligs eco tour.

In the next section of this page let me give an example of some of the things to see on the Island of Valentia.

The Tetra pod was discovered In 1993 by an undergraduate geology student on the north east of Valentia Island. These tracks are thought to date back to Devonian times – somewhere between 350 and 370 million years ago. The Tetra pod foot prints on the island are the most extensive in the World. (The others are in Tarbet Ness, Scotland; Genoa River, NSW Australia; Glen Isla, Victoria Australia)

Geokaun Mountain & Fogher Cliffs allow you the opportunity to enjoy a spectacular 360 degree views, including The Skelligs, Dingle & The Blaskets the mountains of Kerry, Portmagee , Fogher Cliffs, Valentia Island, and the Atlantic and extends westward as far as the eye can see. Geokaun is widely regarded as one of the best viewpoints in Ireland.

The Valentia Light house is believed to have been built in the 16th century which was one of two built on Valentia Island around this time. The outline of the Cromwell Point fort with its bastions and barrack inside its wall can still be easily traced from the air, lying just inside the lighthouse enclosure wall. Originally the lighthouse was staffed by a single keeper, housed with his family on site, however with automation the keeper was withdrawn and a part-time attendant was appointed to look after the station. The light house is now a visitor center where thousands of people visit annually.

More things to do and see on the island of Valentia

TRANSATLANTIC CABLE
Location where the first transatlantic cable was laid

Now that you have more information about our wonderful island, we can’t wait to see you here on the island. 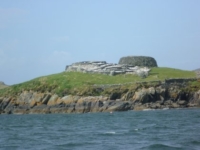 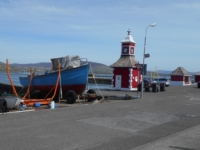